After 42 years working with milk, moulds and microbes, one would imagine a cheesemaker to be in complete control of her craft. But Carolyn Fairbairn, who’s been handmaking unpasteurised cheeses on the Solway Plain near Carlisle since 1978, modestly admits to a mere supporting role.

“The bacteria are in charge,” she says of the friendly lactic acid bacteria whose activities are so integral to the quality and flavour of her cheeses. “I’ve got to look after them. I’m just trying manage things so that the bacteria I want are allowed to thrive a bit more quickly than the ones I don’t want.”

She speaks while rubbing sea salt into a batch of round white cheeses that will become Toveys –mould-ripened goats’ milk cheeses that Carolyn named after the late chef and Lake District hotelier John Tovey, an early fan. Beneath the table where she’s working, a lower shelf is crowded with Cumberland Farmhouse cheeses in presses, their moisture being slowly squeezed out.

Once pressed they will be bound in cloth and aged for at least five months in the maturing room, where they are turned once a week. “All the cheeses are alive and I am responsible for their welfare,” says Carolyn. It’s not hard to imagine her giving them a gentle talking-to.

Cumberland Farmhouse, a hard cow’s-milk cheese, is a bestseller in our Farmshop for its buttery texture, full flavour and local provenance. Delivered to us by Carolyn’s daughter Leonie Fairbairn, it takes pride of place on our cheese counter beside Thornby Moor’s hard goat’s-milk cheese Allerdale and the popular Crofton – a creamy mould-ripened cows’ and goats’ milk cheese that has converted many a goats’-milk sceptic.

It is unusual for a small cheese dairy to produce such diversity of styles – Carolyn also produces day-old goats’-cheese stumpies, fresh curd cheeses and a delicate blue, all using locally sourced milk. Despite being the second largest milk-producing area in the UK, the Solway Plain has no strong tradition of farmhouse cheesemaking – historically it was a butter-making area. So when Carolyn, a former professional photographer, started making cheese on her kitchen table as way of using up the milk produced by a pair of rescued pet goats, she began with a clean slate.

“I can’t bear it when people call it a ‘cheddar’,” she says of Cumberland Farmhouse, which is made using milk from a single local herd of Dairy Shorthorn cows. Carolyn created it as a territorial cheese for Cumbria – our answer to a Lancashire or a Wensleydale or Gloucester: a Cumbrian cheese made with Cumbrian milk reflecting the Cumbrian soil and landscape.

“When people talk about wine, they’ll say it’s grown on a sunny hillside facing south and so on. That’s important, and it’s exactly the same with cheese,” she says. “The soil that your forage comes from, and the breed of the animal that processes that forage into milk, it’s important to how the cheese tastes and it’s important for a healthy diet. This is why I stick to my guns. I don’t mess with the milk. I let it arrive at cheese.”

During nearly half a century in which the food industry has become ever more industrialised, sticking to her guns has not always been easy. In 1989 Carolyn became a founder member of the Specialist Cheesemakers’ Association, which was spearheaded by Neals’ Yard Dairy founder Randolph Hodgson to support and encourage farmhouse cheesemakers in the face of increasing regulation and the pressure to pasteurise.

“Working with raw milk leaves you no excuses,” says Leonie, who’s been a champion of gut-friendly real food since her mother sent her to school with packed lunches made from homemade bread and goats’ cheese that had been ripening in the spare room. “You have to have good quality milk. It concentrates the mind from the beginning of the process, which improves animal health and wellbeing.”

She explains why using milk that has not been heat-treated to kill microbes is so essential to the unique flavours and qualities of their cheeses. “A very broad spectrum of bacteria remains alive and active within the milk, and that will go on to be reflected in the flavour and structure of the cheese,” she says. “With pasteurised milk you often get a more upfront and one-dimensional flavour. But with raw-milk cheese there’s complexity and length of flavour. The flavour tends to build on your palette and then linger.”

Our Farmshop buyer Alexander Evans, who began his career behind the cheese counter at Harrods in the 1980s, says he has huge respect for Carolyn and other raw-milk farmhouse cheese producers who have fought so hard to preserve recipes and techniques deeply entwined with their landscapes and places. “Carolyn was a pioneer of making farmhouse cheese in Cumbria when it was dominated by the big dairies,” he says. “She is fiercely protective of what she does.”

Alexander has recently added Tovey and the creamy blue-veined Blue Whinnow to the range of Thornby Moor Dairy cheeses on our counter. But he remains most devoted to the Cumberland Oak Smoked, which Carolyn and Leonie infuse slowly over oak shavings in a smokehouse they built themselves.

He loves to visit to the tar-blackened outbuilding behind the dairy, where smoke creeps out from beneath a rickety wooden door and the pale yellow cheeses take on a deep amber hue. “That incredible sunset yellow colour inside when you open it the cheese,” he says. “There’s nothing better.” 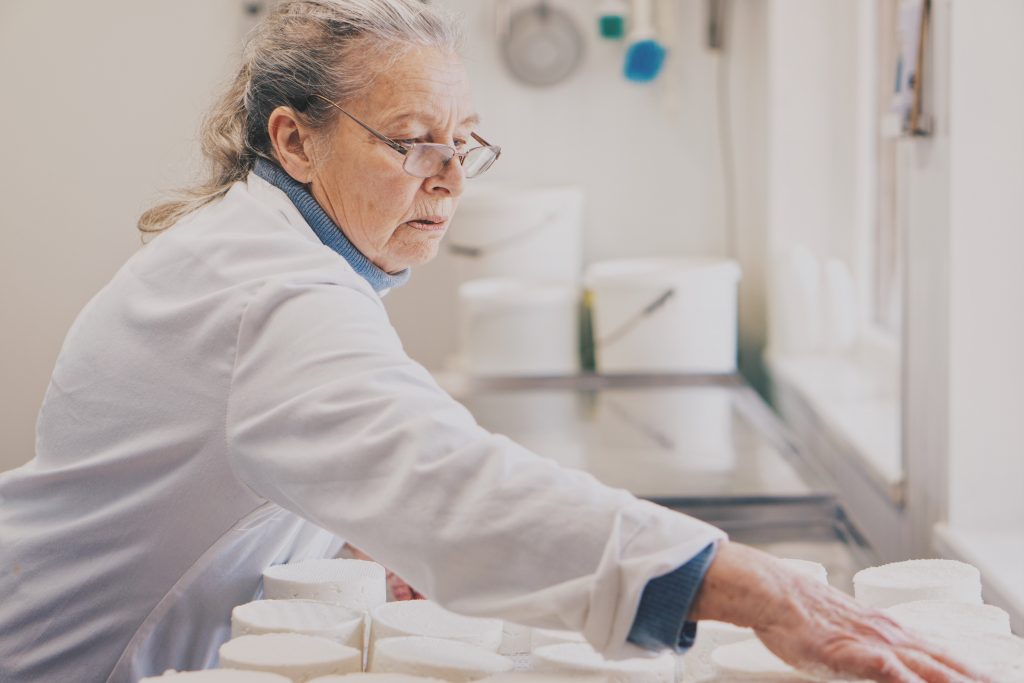 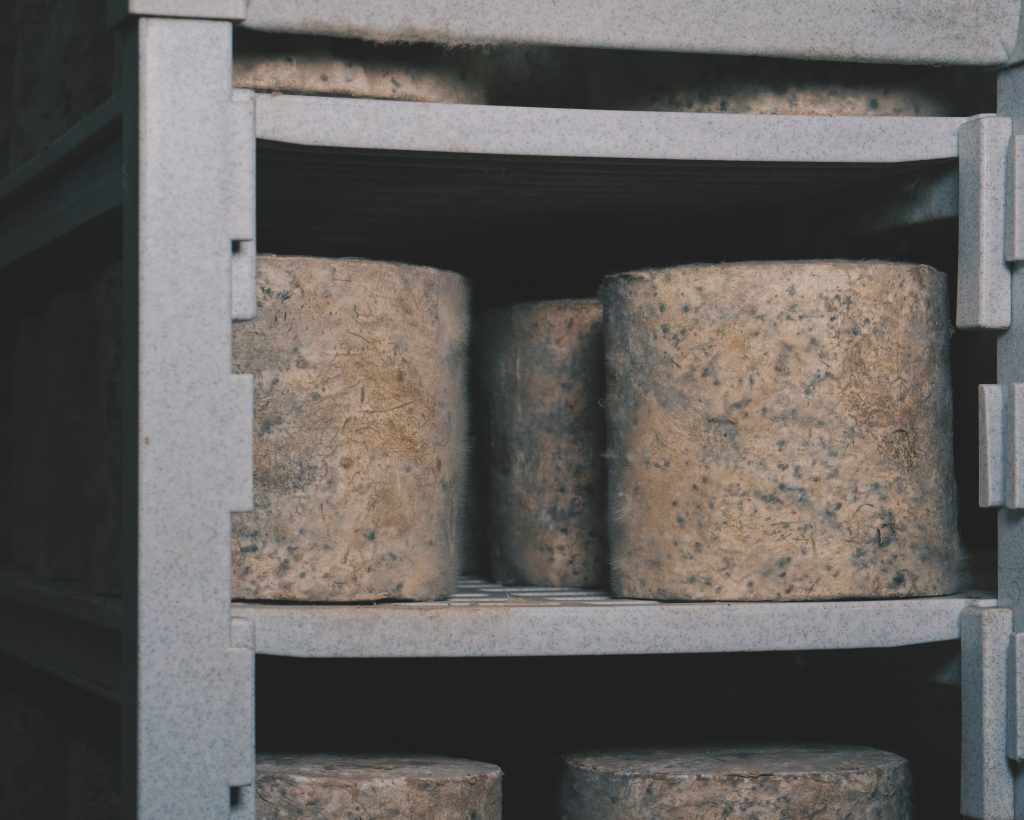 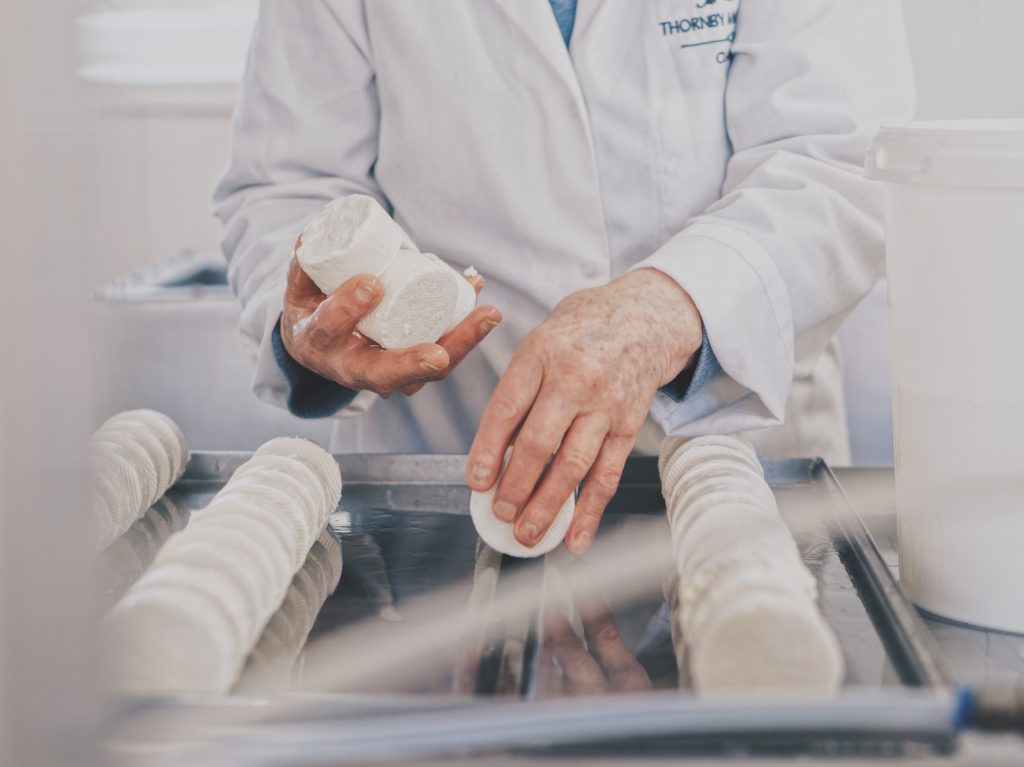